It not only reflects the urgency Solidaridad feels to accelerate sustainable economic development on a global scale, but also reflects the fact that the European activities of Solidaridad are increasingly multi-national and geared towards the heart of the European market and political power. Not only in Germany but also in the United Kingdom, the Scandinavian countries, Switzerland, France and in Brussels, Solidaridad is creating new partnerships with donors, companies and policy makers to achieve its goals.

A great number of companies have made sustainability commitments for 2020 and beyond. There is interest from companies to engage with civil society organizations to co-invest in and develop solutions for global sustainability problems.

There are sufficient good and new funding opportunities for Solidaridad. As donors increasingly expect applicants to work in consortia with other civil society organizations or in public-private partnerships, Solidaridad Europe is encouraging this approach throughout the global Solidaridad Network.

A general trend in all projects in Europe is that the effectiveness of voluntary standards, certification schemes and sector agreements for addressing sustainability issues is being questioned including in the public debate. To date, the impact of these strategies in producing countries has been limited and at times has even negatively affected small-scale producers, such as in the palm oil sector.

The Dutch policy on agreements for International Responsible Business Conduct will be evaluated in 2019, after which the government will assess whether more binding measures are required. Public and political support for the agreements seems to be decreasing. As the limits of market transformation through voluntary action seem to have been reached and demand for more binding frameworks is growing, working on legislative action will be a likely next step for Solidaridad Europe.

In the European sector of international development, aspects such as accountability, good governance, transparency and integrity are increasingly more important in building trust and a licence to operate. Organizations such as Solidaridad are not only accountable to the donors but also to the sector and to society. Solidaridad Europe is making a continuous effort to make sure it meets and exceeds all requirements regarding accountability, good governance, transparency and integrity.

In 2018, the European General Data Protection Regulation (GDPR) was introduced with more stringent requirements in protecting personal data worldwide. In 2018, a project team has endeavoured to make sure Solidaridad Europe is working in line with the GDPR requirements regarding data protection. Policies, procedures, instruments, organization and security measures are now in place.

The relationship with the Dutch Ministry of Foreign Affairs remains strong. The cooperation under the Practice for Change and Advocacy for Change programmes was continued. The ministry’s involvement in Solidaridad’s formal mid-term review, as well as the new commitment for a palm oil climate programme (NI-SCOPS), were a clear sign of the good partnership. The relationship with the German Ministry of Foreign Affairs was further developed thanks to the newly established Solidaridad Germany.

Solidaridad in Europe has three contracts in place with the European Union and has made a significant investment in its capacity to manage grants from this donor. While these contracts are primarily country specific, Solidaridad also strengthened its engagement in Brussels, for example, through participation in the EU Development Days.

Solidaridad prolonged its ten-year partnership with the Dutch Postcode Lottery for another five years, which includes unrestricted financial support of 1.35 million euros per year.

2018 has been a great year with many successes to celebrate. Most of the results aimed for have been reached. Solidaridad Europe established a German office; income grew to more than 30 million euros; Solidaridad signed new contracts with the European Union, Achmea, Norad among other donors. And a new palm oil climate programme supported by the Dutch government positions Solidaridad very well to work on sustainable change and attract more funds in Europe.

The Corporate Engagement Team has been working hard on developing value propositions and building new relationships with companies, and the team, after a slow start in 2017, is up to speed now. The team managed 28 active corporate partnerships including two strategic partnerships with Henkel and Syngenta. In 2018, the Joint Business Development Plan with Unilever came to an end. Solidaridad continues to partner with Unilever in Palm Oil and Minerals.

Solidaridad increased its visibility significantly in the policy influencing domain in the Hague with Dutch members of parliament, as well as in Germany and Europe with several roundtables. Solidaridad participated in 37 Multi-Stakeholder Initiatives.

From a communications perspective, Solidaridad finished the “Angel in the Sugarcane” film and screened it during the Movies that Matter Festival. Solidaridad also received lots of free publicity around the publication of the Cocoa and Coffee Barometers and reached 3.5 million people with the modebewust campaign that included the “Hat-swap” event with Dutch members of parliament. In addition, Solidaridad worked with Lendahand and Icco on the development of a new crowdfunding platform and developed a new individual donor fundraising and branding strategy.

Overall, Solidaridad Europe’s policy influencing approach was further expanded upon in 2018. In a series of internal strategy sessions and the mid-term evaluation of our Dutch government funded Advocacy for Change programme, the operational Theory of Change was updated. It now includes a broader palette of stakeholders for changing public and private policies that support inclusive and sustainable value chains, as well as acknowledging the role of financial institutions and certification standards.

In 2018, the corporate engagement team conducted an extensive market and sector analysis to identify new corporate partners. They mobilized new and existing private sector parties to promote solutions that increase the availability and uptake of sustainable products. The team placed special emphasis on developing business propositions for European impact investors and financial institutions. In total, the team managed 28 active corporate partnerships in 2018 including 20 supply chain partnerships of which three are new.

The relationship with the Dutch Ministry of Foreign Affairs remains strong. The cooperation under the Practice for Change and Advocacy for Change programmes was continued. The ministry’s involvement in Solidaridad’s formal mid-term review, as well as the new commitment for a palm oil climate programme (NI-SCOPS), were a clear sign of the good partnership. The relationship with the German Ministry of Foreign Affairs was further developed thanks to the newly established office of Solidaridad in Germany.

In 2018, the Knowledge Management and Learning team supported the development of Solidaridad’s Gender and Landscape approaches and engaged in knowledge partnerships. Solidaridad’s knowledge partner, Copenhagen Business School, secured funding for research related to the BMI (cotton) project in Ethiopia. Wageningen University and Research cooperated with Solidaridad in landscape monitoring research and the Netherlands Environmental Assessment Agency cooperated in the testing of participatory land use scenario modelling in Honduras.

The film Angel in the Sugarcane was produced and had its première at the Movies that Matter film festival in March in The Hague thanks to financing from the Dutch Postcode Lottery. This film gives a poignant insight in the labour conditions of sugarcane workers in El Salvador, and how partners of Solidaridad are helping them improve their lot.

In April, Solidaridad contributed to the launch of the Cocoa Barometer 2018 by engaging international press and facilitated sessions at the World Cocoa Conference in Berlin where more than thousand professionals from the sector were gathered. Solidaridad was a prominent participant of the conference and highly visible, which resulted in better relation building opportunities.

In May, Solidaridad launched the Modebewust consumer campaign together with its partner Sympany. The goal was to create awareness about the origin of clothing, providing insights and tips on how to make sustainable clothing choices. The campaign, geared at a younger audience, achieved a reach of 3.5 million people, equivalent to an advertisement value of 550,000 euros. 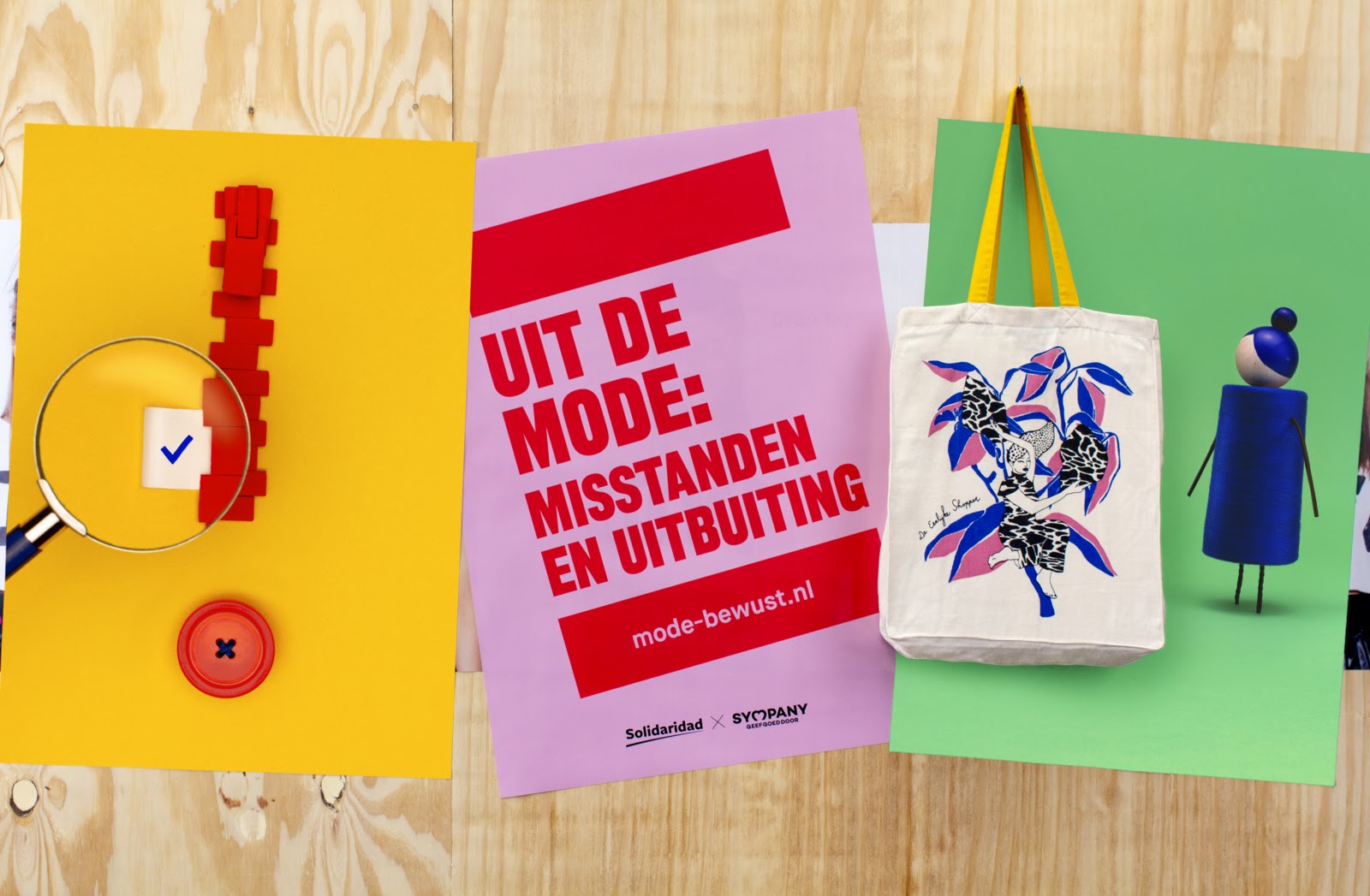 In June, following the publication of the Coffee Barometer 2018, Solidaridad organized the debate ‘Who is paying for the coffee of the future?’. The Rainforest Alliance, Rabobank and development magazine Vice Versa supported the debate, which took place the evening before the World of Coffee event at a location in the heart of the Dutch financial sector. This debate created more awareness about the need to invest in coffee growing regions and the role the financial sector can play.

In September, a week before ‘Prinsjesdag’, the day on which the Dutch government discloses the annual budget and when members of parliament traditionally wear hats, Solidaridad organized a ‘hat swap’-event. During this event, Solidaridad representatives discussed challenges in the textiles industry with members of parliament, representatives of fashion brands, and the general Dutch public.

In December, Solidaridad Germany organized a ‘speed and scale’ run at the World Landscape Forum in Bonn, cheering on international policy makers to speed up and scale activities to make sure that the world can feed a growing population while protecting its landscapes at the same time.

Solidaridad also performed a follow-up of the 2017 ‘A world without coffee’ consumer campaign in December. The campaign reached 324,000 people.

In 2018, Solidaridad Germany was formalized. The small team that works from their office in Freiburg is fully operational and growing. A new public affairs position was created in Solidaridad’s office in Utrecht.

The year saw a 19% turnover of personnel, mostly due to new jobs created and temporary employees leaving the organization. At the end of 2018, Solidaridad Netherlands employed 50 people (2017: 46). During the year, there was an average of 44.5 full-time staff under contract. In 2017, this was 40. Staff numbers grew due to growing demand and budget in Solidaridad Europe.

As a result of the transition to a new, core activity focused way of working, Solidaridad Europe has revised its Job and Salary Framework. A new function matrix, new job descriptions and a new competences manual have been developed.

The total income of Solidaridad Europe in 2018 was 30,752,408 euros, which was 5,233,408 euros more than budgeted and 7,706,216 euros more than in 2017. Income from private individuals amounted to 1,133,474 euros of which 805,000 euros was raised through direct mailings and 328,000 euros were inheritances. The majority of the funding comes from government subsidies, while a number of private funds, companies and other organizations also give important financial support. The higher income was mainly due to postponed spending of subsidies and new contracts in 2018.

The result over the year 2018 including interest and income from investments was 555,306 euros.

The Solidaridad Europe Annual Financial Report 2018 includes many details about the financial situation and has been drawn up in accordance with the Guideline for Fundraising Institutions (Richtlijn Fondsenwervende instellingen: RJ 650), which is part of the accounting standards produced by the Dutch Accounting Standards Board (Raad voor de Jaarverslaggeving). The financial figures of Solidaridad Netherlands and Solidaridad Germany are consolidated in the Solidaridad Europe annual accounts. Solidaridad Netherlands publishes a separate Annual Financial Report. You can download the audited annual reports here: